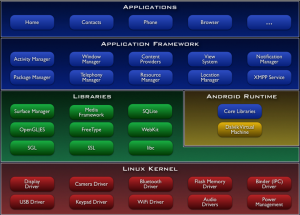 When they announced Android, i already suspected that WebKit would be the full blown web browser that they mentioned. everything else just wouldn’t have made sense.

Now it’s official. So every nearly every decent mobile device is going to have WebKit as it’s rendering engine:

BTW: Although both the N95 and the iPhone are using WebKit, we are talking about two completely different user experiences.

Seems that i definitely have some closer look at WebKit. Until now i’m using Firefox as my main desktop browser (although) i’m running mostly Mac OS X at home. This is mainly due to it’s extensibility (i have plenty of extensions installed). But there also seem to be quite some Safari plug-ins around. But everytime i tried to run Minimo on my T-Mobile MDA it was unusable

PS.: Has anybody WebKit running on a Chumby?

PPS: If anybody is wondering what this Dalvik VM is in the above diagram, head over here. Seems to be a quite clever move by Android in order to navigate the Java LIcensing seas