Back in November in my “iTouch – first impressions” post i wrote:

Well. It’s about time. Yesterday i found (via fscklog) and installed JoikuSpot on my N95. It advertises as:

All i can say until now is: It works as promised. Actually i didn’t install it via SMS but downloaded it to my PC and pushed it via Bluetooth to the N95.

Started it and voila: 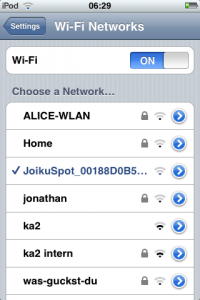 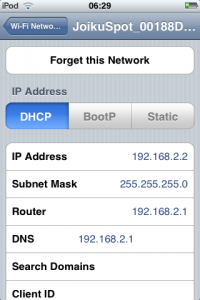 Seems to be an ad-hoc Network. It’s unsecured (don’t know if that’s a “feature” of ad-hoc networks. Does anybody know?). And the first request seems to be redirected to joikuspot.com. As long as they aren’t pulling up a 1MB page there, i don’t care too much. You can cancel the request anyway).

Only did a few request right now. No hiccups so far although it’s a beta with a production release announced for H2/2008.

PS.: I also wanted to do some N95 screenshots.  But then i recognized i hadn’t installed FExplorer (my screenshot utility of choice for series60) on the N95.

I learned that for Symbian 3rd edition i had to sign the .sis file first. In order to do so you have to do either this or this :-(. This might be an indication what lies ahead with the iPhone / iTouch SDK. Hopefully Apple will come up with a simple integration of the signing process into the SDK, as well as freee signing for open source software. (see also).

If you don’t know what the heck i’m talking about read my thoughts on the iPhone SDK.