EMagazines are the new hype, NYT Skimmer showing the way

In the context of the current paid content debate at least magazine publishers seem to start thinking how the content that people might be willing to pay for should look like. ( Others are saying, they are dusting off their years old concepts. ) However, EMagazines seem to be the new hype. Every week we see the wraps taken off some magazine concept or even a first offering.

Two weeks ago it was Conde Nast showing off a concept tablet version of Wired (AllThingsD),

In addition i’ve seen a presentation about a eMagazine version of another big german weekly magazine.

Moreover,  a number of American Magazine Publishers (reportedly Time Inc. Condé Nast and Hearst among them) are discussing a “Hulu for Magazines” (AllThingsD) which most industry observers deem to be a difficult thing to succeed given the mights of Amazon and Apple which is more than rumoured to get its tablet out of the door in the next year (Gizmodo). But given the success of Hulu i wouldn’t think that they couldn’t pull off at least some market share.

The problem they all face: Right now they have to serve a multitude of formats right now most of the EMagazines are developed based on Adobe Air./ Adobe Flash But is more than unlikely that Apple is going to use that  for its iTunes offering. If the iTunes Extra and iTunes LP specs are any hint, it is much more likely that it is a HTML/Javacript based format. (iTunes already supports PDF as a format, e.g. Slides accompanying videos of lectures on iTunes U)

In addition there is ePub, the open, XHTML/CSS based eBook standard that everybody except Amazon is using. Amazon still uses a variant of the Mobipocket format.

I think that (as usual) the NYT is showing the way. 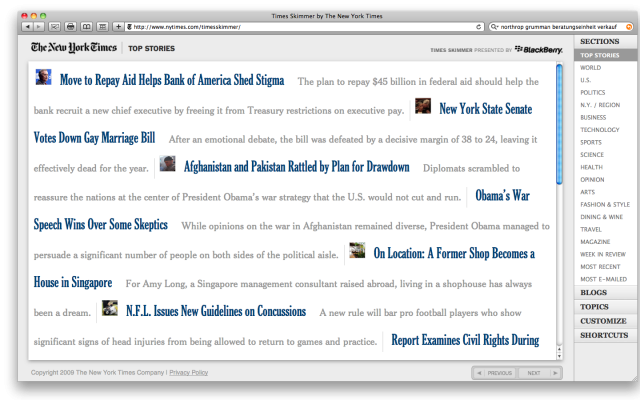 My look into the EReading crystal ball

So what is my educated guess?