After more than one week with the iTouch i have to say that my first impressions were definitely right. I haven’t upgraded to 1.1.2 yet, although fairly simple jailbreaking procedures are available right now. But there is no feature in 1.1.2 that i need desperately, hence i skip it until i have some spare time. 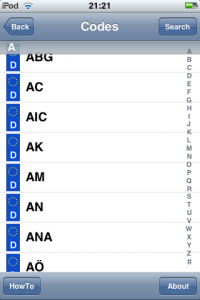 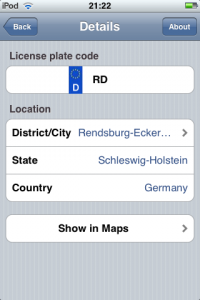 Lplates is an application that implements a database of license plate codes for a number of european countries.
The latter was especially interesting to me because the author seemingly was german and mainly did the application in oder to learn how the different UI components work.

It makes use of most if not all UI components but not in an artificial but a very natural manner.

Hence i contacted him about making the app open source. He answered that the app isn’t quite ready yet, but it will take only a couple more days. We’ll see.

The app also shows a shortcoming of the current version of the integration with the maps app. You can easily swith from another app to the maps app. But you couldn’t switch back to the other app without losing state when going back through the home button. AFAIR there is no 3rd-Party app thats preserving it’s state hnece i’m unsure if this is a problem with the current SDK or a general problem with the way applications can interact on the iphone. This MacOSX is powering the iTouch, multitasking shouldn’t be a problem. 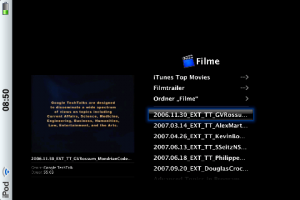 I also installed VNsea and logged into my MBP. The interesting fact is that it works and you even can zoom in and out. But you couldn’t really interact with the screen. The most interesting use case for me would be to remote control the mac mini via frontrow without actually have to switch on the big screen just to listen to some music etc.

But unfortunately the iTouch keyboards lack the arrow keys. The terminal application implenented a pie menu in order to send these keys to the app. But VNsea is lacking this feature. Hence i couldn’t scroll these lists and the idea to remote control frontrow has to wait until i figure out how to use some other keys for controlling frontrow.

Or a dedicated RemoteControl Application for the iPhone is going to be available. Like the RemoteBuddy/ SallingClicker combination that allows you to control a mac on a Nojia phone via Bluetooth. (The iPhone has to get on par with that).
Or even better a dedicated “RemoteRow” (Web)App is going to be available. Maybe i should go and try to build a WebApp on my own. What’s the best starting point?

In addition i installed SceenShot for taking screenshots with a GUI, Light just in case i need some. And i prepared for upgradingto 1.1.2 by installing OktoPrep.

Finally i have a device that allows me to watch/hear Google and Yahoo Tech Talks and iTunes U stuff while commuting. And this means watching them at all.

Until now i listened to a couple of Python and Django Talks, Guido van Rossums talk on code review on the web, some talks by Douglas Crockford on the state of Ajax, …. But i was most impressed by the talk on f-script.

Basically F-Script a smalltalk implementation that wraps around cocoa. In addition it can be injected into running Cocoa Apps (e.g. in order to debug them) and enhances Smalltalk with APL like array programming. I definitely recommend every serious Mac OS X user / developer to have a look at f-script. I even wonder f f-script can be cross-compiled for the iTouch.

Right now i’m watching a Computer Musings Lecture on ‘Cool Graphs’ given by the legendary Donald E. Knuth that you can get from Stanford at iTunes U. If you don’t happen to know iTunes U, and are interested in higher education and e-learning, have a look at it. While german universities ( if they happen to have an e-learning programme at all) usuakky hide their course material, you can find courses and talks from the most prestigious american universities (e.g. MIT, Stanford, …) for free on iTunes U.

So in summary video is really great. I’m especially positively surprised by the battery time while watching video. But therea are also some glitches. Since some of the videos are more or less slideshows, it sometimes makes sense just tolisten to them. Then you want to turn off the screen in order to save some battery. But you can’t do that. You also canÄt rate videos like you can rate music and podcasts.

BTW.: Does anyone know why the Googe Tech Talks have a delay in audio?