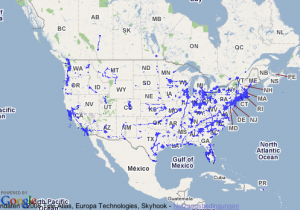 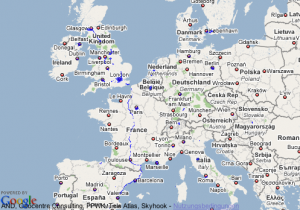 But Apple’s announcement finally brought this technology to the attention of a broader audience. Unfortunately for people living outside the US, Skyhook Wireless coverage is very dim in europe and the plans are not too promising.

To pinpoint location, WPS uses a massive reference network comprised of the known locations of over 23 million Wi-Fi access points. To develop this database, Skyhook has deployed specialized vehicles to survey every single street, highway, and alley in 2500 US cities, scanning for Wi-Fi access points and plotting their precise geographic locations.

WPS currently provides coverage to 70% of the American, Canadian, and Australian populations. By the end of March 2008, Skyhook will have coverage in the top 50 metropolitan areas of Europe as well as cities and towns representing 50% of the UK, French and German markets.

But acquiring and maintaining large amounts of data can either be done using lots of money and high-tech or using lots of people and sufficient tech enabling them to do the tasks. Some of the best examples for the feasibility of the latter “wisdom of the crowds” approach are Wikipedia and OpenStreetMap.

Wardriving and warwalking are taking the wisdom of the crowd concept to the domain of Wi-Fi based triangulation using tools like NetStumbler and Kismet. Navizon is also using this approach with its reward scheme and the respective capabilities built into its client software. 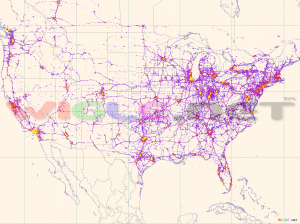 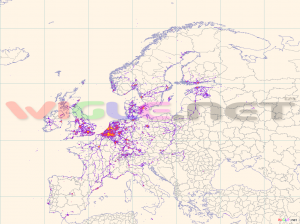 Of the various open Wi-Fi databases WiGLE has an european coverage superior to Skyhook Wireless (at least by looking at the maps) and the stats are not looking to bad either with 13,621,213 unique networks, 12,840,768 unique networks with location, and 793,274,794 unique locations in the database at the time of my lookup. WiGLE also has (a kind of) geolocation API that is available to registered users. I didn’t have a closer look at the T & Cs, hence i have no idea if/when it is legitimate to use the API.

Looking at the headline of this post you may now wonder what all this has to do with Newspapers?

Easy. If you want to have a regularily updated database with good to great coverage you need to have people that regularily cover most of the area. Typically a good distribution organization is doing this. Like the postal service. Todays postmen not only deliver the post they also already serve a number of data gathering tasks like recording with cars are parked at a house etc. This data is then sold to companies like Nielsen, infas etc.

Think about doing a field test. Equip some of the delivery men with the respective data gathering devices, IMHO a series 60 phone or a Windows Mobile should be sufficient with that. Start talking to the providers or build a solution yourself. After all all this raw data may also useful for getting into talks with mobile advertisers like Jiwire.

What do you think? Stupid idea?