Finally the my iPhone 3G, arrived. I skipped the first gen, because didn’t have a feature i was interested in that wasn’t also contained inthe iTouch. With 3G/HSDPA and GPS it now also is featurewise mostly on par with my N95, only missing the 5Megapixel auto-focus camera with a Zeiss Lens.

I immediately updated it to 2.0.1. The plan is to NOT jailbreak it (it’s a company phone), but to upgrade the iTouch to 2.0.1 and jailbreak this one (any positive reports on jailbreaking the iTouch?).

After the jailbreak i had to pay a visit to the app store. Nothing too different  to Installer.app and Cydia, but a quantum leap compared to installing Apps on a N95.

THIS is a game changer for mobile application distribution to the average consumer. One and a half years ago we introduced RefreshMobiles mobizines – mobile newspaper versions (implemented in FlashLite for Series60 and as J2ME for other phones) in the german market. All in all the FlashVersion was featurewise comparable to the news apps you can get on the iPhone. But these apps never took off (and we canceled them half a year ago) due to two reasons.

First there was insuffient marketing from the newspapers and second andmore important: The provisioning process was cumbersome and error-prone. Even I, with nearly 10 years experience in the field had problems installing the apps.

Compared to this mess the installation of apps on the iPhone was as smooth as can be (I used the wifi at home for installation). I ended up with the following apps (and a zero cent bill): 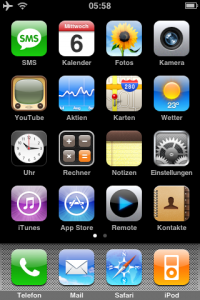 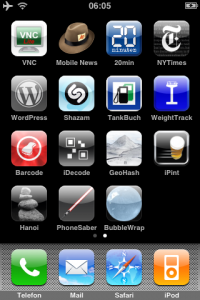 Expect some reviews of the mobile news apps in the near future.