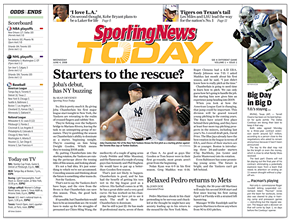 Last week “Sporting News Today“.It first looks like a traditional “epaper” version of a newspaper with the differences that the paper format is not portrait but landscape. But this newspaper is not going to be printed, at least not at the publishers premises. It is an all digital newspaper that is delivered to it’s subscribers via an email containing a link to the current issue on the web. Sporting News Today purpose is to fill the gap between the breaking news on sportingnews.com and the bi-weekly Sporting News magazine.

Hence it is a very interesting experiment in bridging the digital divide and makes IMHO much more sense than all the other e-reader publications of other main stream media houses, which are merely copies of the printed publications (e.g. the recently announced Read and Go initiative of Orange and some french newspapers)

The progressiveness of this experiment is also reflected in the content as the following quotes from the first editorial shows:

Unique insights from our new “columnists”—the 22 current college football stars who’ve signed on to write in-season diaries every week. Our roster is an NCAA Who’s Who, with Heisman hopefuls Chase Daniel (Missouri), Colt McCoy (Texas) and Pat White (West Virginia) at the head of the class.

Frequent opportunities for you, the reader, to also take turns playing writer. We’ll dedicate space in Sporting News Today to fans’ takes on select big games and news. You’ll get a byline, file to an editor, maybe even catch grief from readers.

Unlike your daily newspaper, which went to press before the clock struck midnight, we’ll have full coverage of that 17-inning Dodgers-Rockies game. We’ll have coverage of the Olympics and golf, the Little League World Series and tennis. As other media outlets scale back on pages and people, we’re getting bigger and better. Next month, we’ll debut the newand- improved Sporting News magazine— which we also think you’ll like.

In order to receeive all these goods you don’t have to pay any money, you have to sign up by providing your Name, age and email address, The web issue is powered by a technology called “Published Web Format” from Texterity. In addition to reading online, you can also download an pdf (1st Edition) as well as applications for both PC and Mac. Texterity also provides an iPhone version of it’s web app. So being it able to read on my dream reading device should be easy :-)

Looking at the source code of the web page you can find the following comment:

This shows that sportingnews hopes to finance the whole enchilada by providing better statistics and demographics to the advertisers and hence have better CPM’s and performanced based revenue models. This is supported by Staci Kramer reporting on PaidContent: “The daily will include audio and video, including pre-roll ads.” i.e. all web based technologioes for monetization will beused