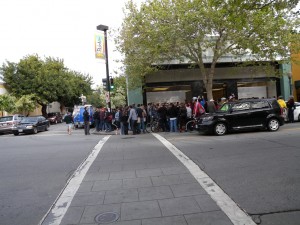 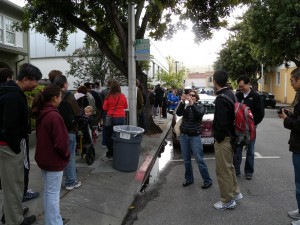 This is a short post about my first impressions after using the iPad and some of the applications i downloaded. I wasn’t able to spend more time yet, because i’m attending wherecamp today and tomorrow and then flying back to germany. But i thought it would be a worthwile exercise. 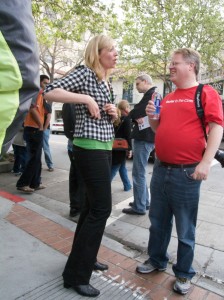 Since i knew i would be in the area i registered for picking up a 32GB iPad at the Palo Alto Store on March 12th. Yesterday i then decided not to come in early and be at the front of the line. Hence i turned up at the store a couple of minutes after 9am. At that time the queue for preordered  phones was approx. 70metres long while the purchase line was  only about 20metres long. Since i overheard that the preordered  line was served first, i stayed with my  original plan to pickup the preordered one. As expected, not only buyers showed up but also spectators and the media.

As a german i wondered why people showed up to pickup their preordered iPads when the can it have delivered at home. Most of them seemed to be there to meet friends, have some fun and share the experience.

While waiting we the preordered units where checked in by Apple staff with a custom app on their iphones, and we were treated with krispykremes and water. It took me about one hour to get to the front of the  line. While waiting i notices that Robert Scoble was there and overheard him telling somebody else that he was first in line (funnily i also overheard some seemingly senior Apple hardware engineer that came to the store not recognizing Scoble but only talking about “this guy”).

I was assigned a staff member  (Hi, Kevin) that helped me pickup my purchase. As usual with the Apple stores, the store was on my credit card companies blacklist, but as opposed to the store on 5th Avenue, the additional authorization worked at the first  try.

I didn’t buy any additional stuff but the VGA video adapter and was done in about 5 minutes total. 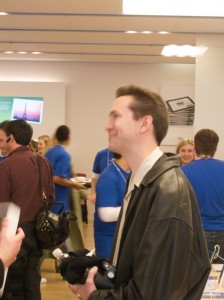 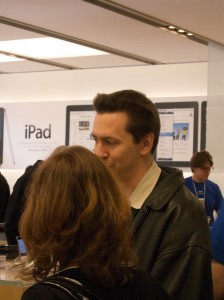 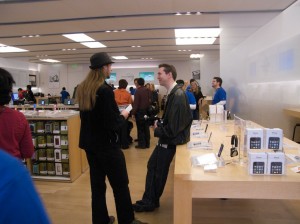 As Scott Forstall was at the store and talking to customers, i had to walk over and ask him about any new details on the europe launch.  Instead of answering himself he took the safe route and relayed the question to Katie (obviously Katie Cotton) who unsurprisingly gave me the official line of  “end of April”.  Nevertheless the fact of Scott being there and me being able to just walk over and ask him was a nice thing.

I unboxed and activated my iPad at Googles car park before going to Wherecamp2010. Since i already downloaded most of the apps i wanted to test / buy yesterday, i was able to sync them on the device without taking to much time from the conference sessions. 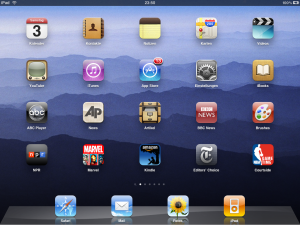 In this  post i will only give some general impressions about the device and the various  apps i have used (mainly news related apps). A more detailed review of the different news apps will follow  suitly.  for the general impressions i will focus on the parts that you probably might not have heard elsewhere.

The iPad is definitely the couch surfing / computing / video watching device i had hoped for. Especially watching video, both video synced from iTunes / iTunesU as well as video streamed via wifi (e.g. in the Reuters, BBC and ABC apps) was amazingly good. I definitely can see this device as a major step for no longer needing a TV set. It makes watching video whereever you have a wifi connection so easy and seamless . You can even watch it together  with your spouse without too many problems.

Unfortunately  i’m not sure that you will be able to watch web based video on the big screen, since the VGA adapter seemingly only works with certain applications, such as Videos, Keynote and Youtube. As with the iPhone and the composite/s-video out  it does not replicate the iPad display on an external screen. Since all the apps i’ve seen the video out working with are Apple apps, and i’m not aware of an Video-Out API i’m afraid, that video out might be something that is dissappointing.

Update: Jens tells me that there is an Video Out API. Thanks a lot

After reading the reviews i’m also positely surprised of the useability of the onscreen keyboard in landscape mode. It is definitely good enough for me for note taking during meetings and conferences (tested it this afternoon at wherecamp).

Pixeldoubling IMHO works well enough with most iPhone only apps that i’m wondering why the heck they didn’t make it an option that is enabled by default and you have to enable it for every single app. At least it remembers the setting for the app.